You are here: Home / Product details / Is the Model Light, from Christiania Bikes the most versatile cargo bike you can buy?

If it ain’t broke… – how a 30 year old design remains one of the most versatile bikes in the world.

Most cars, even though they can do multiple things, are primarily designed for a particular purpose. Small hatchbacks are excellent city cars, station wagons are great for families, utes are perfect for trades and carting rough loads around. Luxury sedans are perfect for showing status and enormous SUVs are perfect for a single occupant holding a takeaway coffee cup, wearing active wear and driving in inner city suburbs…

Cargo bikes are definitely more flexible, but also come out of the box focused on a single purpose – carrying kids and/or cargo.

But there is one bike, unchanged since the 70s that can modified in such a wide range of ways, that it can claim the title of worlds most versatile bike (should said title exist). This bike has been a cargo bike, a street taxi, a bike to transport seniors, a food and drinks stand, a promotional stand more.

We are talking about the Model Light, from Christiania Bikes. They are one of the oldest cargo bike manufacturers in the world. And have been making cargo bikes since 1984, when Lars Engstrøm made a cargo bike for his partner Annie Lerche. In less than an hour after the first bike was made, they got an order for another one and Christiana Bikes was born.

The Model Light, is the flagship bike and is an upgraded version of the classic H/Box. The H/Box is a design icon all over Europe and is part of the culture in Copenhagen. In fact, the design is so iconic, that the 2011 it received the “Danish Classic Prize” from the Danish Design Centre. A prize which is only given to outstanding Danish products which have remained nearly unchanged for at least 25 years.

The Model Light preserves all of the great qualities of the original bike. And over time subtle improvements have been added which is what makes this bike more and more versatile.

The single tube, mono rear frame has remained pretty much the same from the original design. But the material has been upgraded from steel to aluminium, reducing the weight of the bike down to 34 kg (putting it on par with existing cargo bikes)

The turning radius has been refined and is now only 480 cm. Making it surprisingly manoeuvrable. The design of the bike has been refined and the total width is now only 87cm. Why 87 cm exactly? The company wanted the bike to easily enter standard sized backyard doors in Copenhagen – testament to their commitment of continual improvement. Of course it will fit into the more generously sized gates and garages of Melbourne :-).

Originally designed for carrying children in the 1970s Denmark, the design of the cargo box has been tweaked to carry almost anything in almost any type of weather.

The cargo box is still made out of plywood with a birch edge. It is still hand build in Denmark using using FSC timber. But the box is now fully waterproofed and comes with a range of accessories and can be set up for almost any situation.

Which leads us to the versatility of the bike. Though the design has remained pretty much unchanged, there is a ton of options now available for the the Model Light (and actually any other Christiania Bike. This means that you can setup the bike for whatever type of activity you like. You can even buy just the frame and built up your own cargo box!

The following is a list of all options and specs that you can have with the Model Light. Have a cup of tea with you, it’s a big’un.

The standard frame comes in a black finish, but can also come in red and cream (excluding the handlebars).

The handlebar, comes in two sizes: Standard and a +7 which is 7 cm higher.

There are two main varieties of the cargo box, sloped and straight. Both can take a maximum weight (including rider) of 235 kg.

The sloped box is designed for transporting two kids, and has the option of a seat, a bench or two flip up seats. The sloped box can come as a solid box, or with a door, or with a removable front panel.

The straight box can be used to transport up to four children. You can have either two seats, two benches or four flip-up seats.

Either of the boxes can be painted in up to six paint colours. It’s an automotive paint which is tough and durable while also being glossy and bright. Colour options are:

There are a range of systems from Shimano and Sram. All internal gear systems come with a Shimano hub and turning grip. The 8 derailleur gear system is delivered with Sram X4 derailleur and shifter.

Electric
Like most cargo bikes these days, there is an option for an electric drive to be added to the bike. There is a hub motor system and a mid-motor option. The hub motor system is a great all-round option and is equipped with a powerful walk assist. The Pendix mid motor system delivers an almost silent and natural feeling. The mid motor system is recommended for flat spaces like Melbourne and situations where you do not require a high payload.

There are three brake systems for the front wheels:

All systems include a park brake. So you can get out and let the kids in/out without the bike rolling away from you.

Accessories:
If you think the bike isn’t versatile enough, with all these options, then check out all the different accessories that you can get. Customise the bike to whatever spec you like!

1. Bugatti Hood: The Bugatti hood has an aerodynamic and flexible design and comes in two versions.
2. Prairie Hood: Our classic designed hood, which can almost fit all classic models for children. It also has the option of a sun roof which can also be used as windbreak.
3. Rain cover

4. Parking for hood Arches: Allows for the arches to be conveniently stored on top of the mudguard.

5. Garage: The lockable garage covers the bike completely and can also be used with the hood mounted on the box.

8. Tip-up seat with Y-belt for one child.

9. Safety belt – An extra safety belt for mounting in the box.

10. Y-belt – The Y-belt can be used together with a tip-up seat, the bench or our soft seat.

11. Pillow with velcro to easily fasten to the wooden bench.

12. Mattress – Fits the bottom of the box when folded out, and it can be used as a pillow on the Wooden Bench.

13. Cover for front wheels – Either a 24″ or 26″ front wheels in black. These covers keep little hands away from the wheels.

14. Footstep: In aluminium or wood, mounted on the frame, near the mudguard.

16. Kickstand: Guaranteed upright position for the box without the rider needing to be on the bike.

18. Rubber mat  – A popular upgrade for the bottom of the box.

20. Goodies pocket – A small bag for small toys or other small parts.

23. Bag for handlebar: A practical bag that fits on the handlebar and can be used as a shoulder bag as well.

See, over 25 ways to customise the bike. If this still isn’t good enough, remember, you can simply buy the bare frame and build it up yourself! 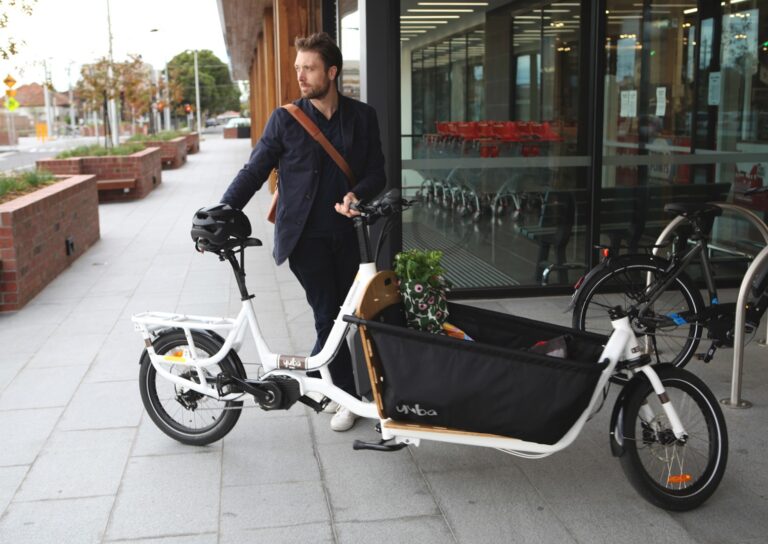 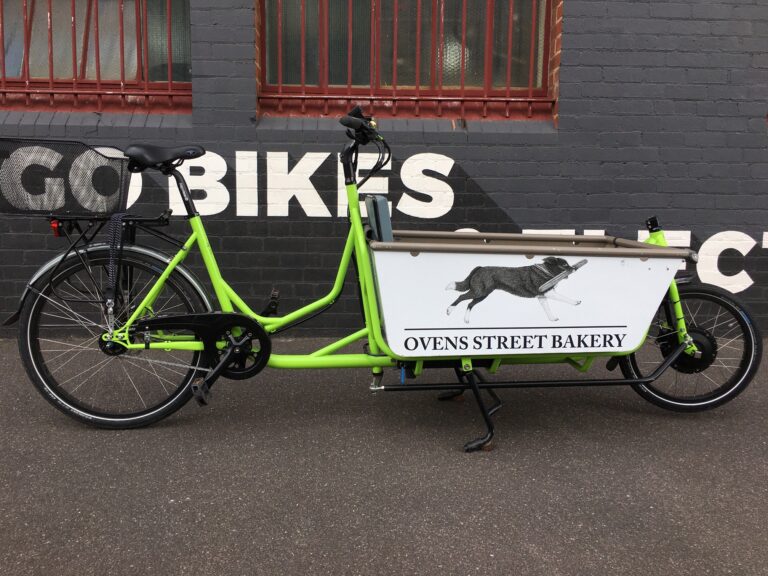